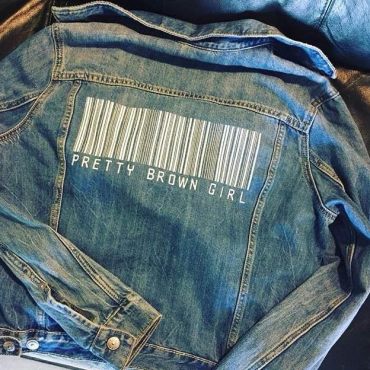 Black women in America have been painted a tough picture over the years. The image of them has been more in the negative light due to the media and the stereotypes that come from them. One major problem that they deal with is skin tone. Light skin black women are seen as “better looking” with the darker skin black women seen not as attractive. As we try to break the stereotypes, Theresa Taylor is on a mission to help black women embrace their skin with her BrownSkinPoppin (B.S.P) clothing line.

Growing up with a strong support system, Taylor was insecure about her skin tone as a youth.  A large part of that was the corrupt picture the media portrays of black women.

“When I was young I was complex about my skin color. I thought my skin was too brown and I didn’t look like what people considered pretty on TV.  Even when I was told I was pretty I still wouldn’t believe it,” said Taylor.

As she began to embrace her own skin, the idea of B.S.P came into play.

BrownSkinPoppin (B.S.P) is a trademarked clothing line that was made to celebrate women of every shade of brown. “How the name originally came about is when me and some of my cousins would see each other or post a picture we looked super good in we would say or put ‘Brown Skin Poppin.’ When I was thinking about how I could celebrate women of color I thought why not take the way me and my cousins complement each other and make it a brand that Brown woman can be proud of,” said Taylor.

A big factor that was important for the evolution of B.S.P was the fact Taylor was an art major in college. She started off as an animation major but after seeing how talented she could be in graphic design, a much needed switch was made.

“After my third year at Cal State LA I was taking a color theory class and my professor told me that she noticed in my painting and designs, she liked a lot of the simplicity. A few months later I ended up interning for an upcoming book writer and my tasks were to find different venues to do her book release parties. In the process of getting her parties all set up she realized she didn’t have a graphic designer to do her logo. That is when I stepped up and offered to do it. That night when I saw people standing and taking pictures next to the logo I created is when I knew I wanted to be a graphic designer,” said Taylor.

As Taylor helps black women embrace their beauty from within, the B.S.P line plans to continue to inspire and support all shades of skin.

“It is up to me to show girls and women to embrace their skin color whether you are a lighter shade of brown or the darkest. Whatever your skin color is, you are beautiful because God created you in his image and chose that specific shade just for you,” said Taylor