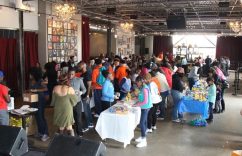 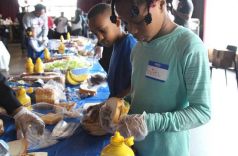 Something special is happening in Chicago, a shift in the mainstream narrative that has plagued this city for years. Chicago is more than what you hear about on the news or radio, it is an amazing city with great people. There is so much going on in this city that people don’t hear about because of the negative attention it receives. One movement going on is #HashtagLunchbag.

#Hashtaglunchbag began on Christmas 2012 in a Los Angeles apartment by a group of friends who were having trouble finding a fun & meaningful way to give back. To date, our movement has grown to 100+ cities hosting #HashtagLunchbag events around the globe! We never thought that our small actions one Christmas morning would have gone global, inspiring others to spread love, one lunch bag at a time.

Aaron Hunter a member of the Chicago based branch of #HashtagLunchbagChicago joined when they started three years ago by Ebony Washington. She started doing it after she saw the idea originated in L.A.

“As we were passing out the lunches there was a lady with her two children asking for help to buy food. That is what sold me on this movement, knowing people needed that kind of help,” said Hunter.

As a group, they are looking for more ways to help the city of Chicago however they can.