Gentrification is a troubling issue that has been affecting our country for generations. Many Black and brown communities are destroyed due to the unfair disadvantages that the government provides. The San Francisco Bay Area is one of most expensive places in the country due to many minorities being displaced from their homes. This crisis has caused many to speak out against gentrification and come up with ways to solve this issue. One young leader of this generation is starting a powerful movement that is getting more people to discuss how we can make a positive impact in the community.

Displaced Lane Clothing is a line created by East Palo Alto native Kyra Brown. Her activism was inspired by her community which has greatly suffered from gentrification. Displaced Lane is here to tell the stories of those who have been removed from their homes. Seeing how it has affected her community, Brown wanted to spread her message in a way that could make people feel comfortable, so fashion was a reliable choice. 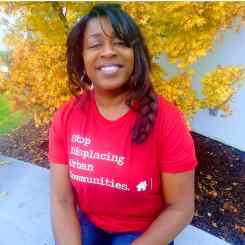 Being a Bay Area native, it was only right for Brown to be inspired by a number of community organizers that make a huge impact in this country. From Angela Davis, Toni Morrison, and Martin Luther King, learning from these greats has helped her start a movement that has inspired those from all walks of life. Displaced Lane has shown interest all across the United States from cities who are suffering from gentrification. Speaking up for injustice while putting a plan of action together is a huge start to improving the community.

The effects of gentrification all over the country have caused activist like Brown to change the narrative. Proving to the world that it is not inevitable and not a force of nature. Displaced Lane also pushes to change the laws against rent control and evictions to save those who have helped build our urban communities. Having people speak out against the issue will cause a positive chain reaction, which is the purpose of the movement.

As this fight against unfair displacement continues, Displaced Lane Clothing has proven to help those who need a voice to speak against injustice. Brown hopes that in the near future more solutions for gentrification can be found. The fall of many popular urban Black and brown cities across the country is a major blow to the legacy they have built.